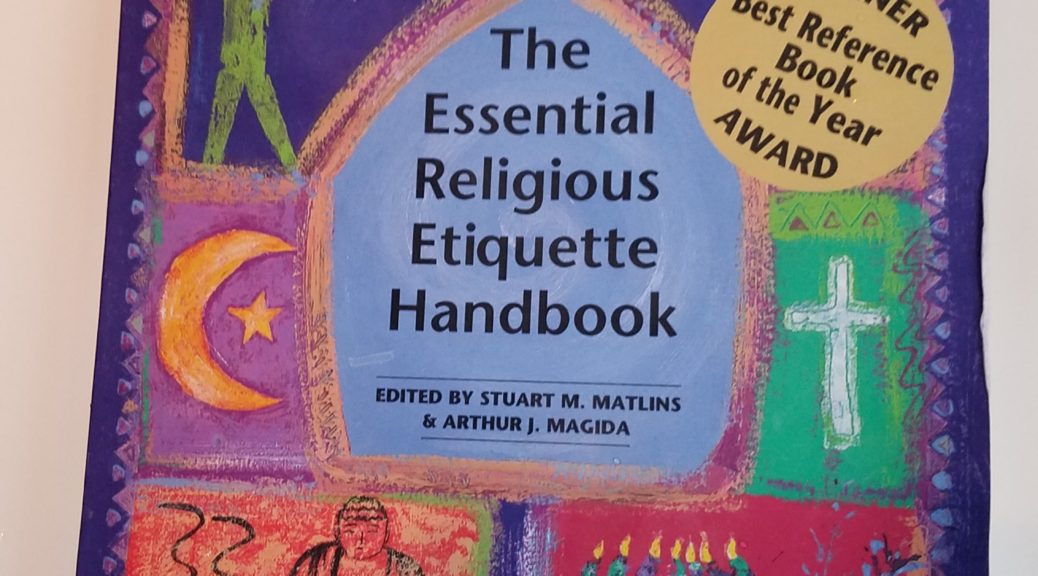 I drove through town on the way to, I forget where, when I observed scores of places of worship of varying sizes – megacomplexes to storefronts – doting the landscape. Along the way, I wondered what it was like inside each of the ones I never sat foot in; how their services are conducted, and would I be welcomed in them.

Now when I reached my destination – ah, now I remember, a newly-opened bookstore – and browsed the shelves, I came across an eye-catching book, “How to Become a Perfect Stranger- The Essential Religious Etiquette Handbook.” So, just like that my “prayers” were answered.

To excerpt a piece from its Foreword, “the book provides North Americans with an inviting point of entry into the world of religious pluralism. As we become comfortable with the ways in which others pray, marry, bury and celebrate, we can move more effectively toward a sense of our single yet diverse peoplehood. Although we are diverse racially, religiously and culturally, we are united by principles and ideals that celebrate our very differences.”

A truism follows a page later in the book’s Preference, namely that 11:00 on Sunday morning is the most segregated hour in America. In addition to race, it applies to religion as well. Why? Well, the fact is that people worship with those who “look like us,” live like us,” “think like us,” and “believe like us.”

And that truism states further; “So while white and black Americans, for example, do not, as a rule, worship together in large numbers, neither do evangelical and liberal Lutherans, Satmar and Lubavitcher Hasidim, Sunni and Shiite Muslims, let alone Jews and Presbyterians, Greek Orthodox and Quakers or Methodists and Buddhists.”

Now I write all the above-mentioned to say this: Because we live in such isolation from one another, we’re often ill-prepared and courageous enough to speak honestly across racial and, as well, religious lines, so we avoid the conversation or “outsource” them to the ratings hungry and sometimes exploitive media. And the consequences are worrisome.

Stated better than I could ever do, the book writes that it “(the book) comes at a time when the airwaves and radio talk shows are dominated by those who would use faith to cover up for intolerance, who exploit eternal truths for short-term gain and who cynically use the spark of faith to ignite culture wars and divide America into bickering camps.”

Now let’s dovetail to hard evidence of our need to venture out of our bubbles of isolation into honest exploration and meaningful dialogue, if nothing else to catch a fleeting glimpse of those who may worship in ways that differ from us.

That evidence? The horrific anti-Semitic attacks on Jews and Jewish establishments in Pittsburgh, Jersey City and New York, the latter of which culminated with stabbings at a Hanukkah celebration at a rabbi’s home. Rampant Islamophobia, the attacks on African American churches in the South, etc., all based on fear, hatred, stereotypes and a lack of basic information. And I could go on.

So, how can we forge ahead with a positive counter narrative, drive a stake into the heart of hate and ignorance and divisive headlines?

So applying that quote as a preamble to the “Everything You Need to Know Before You Go Checklist” provided in “How to Become a Perfect Stranger- The Essential Religious Etiquette Handbook” offers a good start for seeing the other side of a neighbor of a different faith, a sweet spot where we may be surprised to learn about the commonalities and the values we all share.

Here’s how it’s laid out:

The beauty of the book is that it also covers dogma and ideology, holy days and festivals and funerals and mourning.

So armed now with this great resource, I drove back home, jotted down the names of different places of worship for later research, and even started thinking about planning select visits to see the other side of my neighbors!

As the old saying goes, “the impossible is too often untried!” Another truism if there ever was one.

One thought on “A perfect stranger – by Terry Howard”