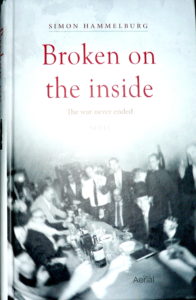 Broken on the inside – The War Never Ended by Dutch author and journalist Simon Hammelburg is based on 1200 interviews with Holocaust survivors and their children. The book reads like a novel but is based on facts, some of which have never been revealed before, disclosing insights of the psychological aftermath of survivors as well as the post-war generations and the traumas that are passed on for over six generations.