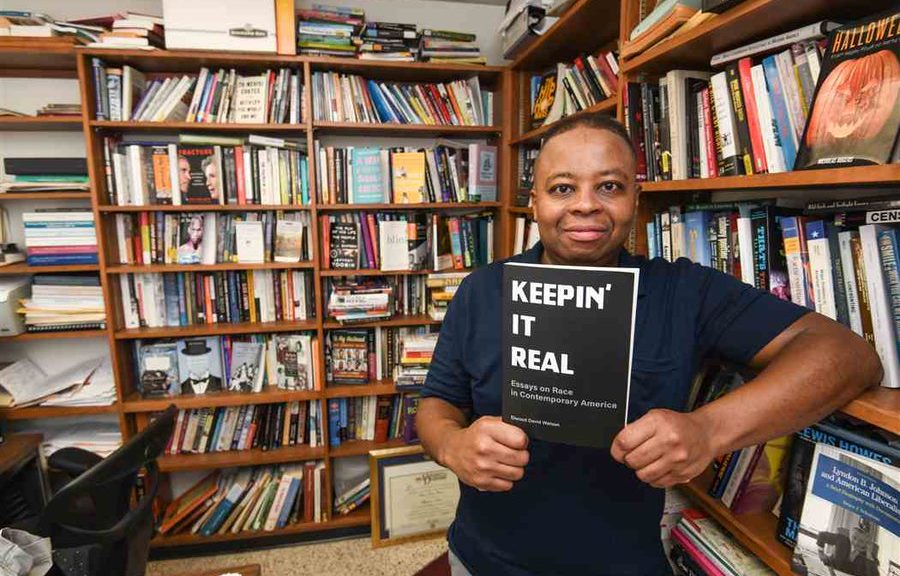 James Baldwin, the 20th century black intellectual, renaissance author and cultural critic, once observed: “History is the present. We carry our history with us. To think otherwise is criminal.”

The University of Chicago Press praises Watson for his unique “take on key aspects of the current landscape surrounding racial issues in America, including the place of the Obamas, the rise of the alt-right and White nationalism, Donald Trump, Colin Kaepernick and the backlash against his protests, Black Lives Matter, sexual politics in the black community, and much more.”

Marco DiPaolo, author and assistant professor at Southwestern Oklahoma State University, calls Keepin It Real: “A harrowing, eye-opening read…a breath of fresh air and a tonic in the midst of an increasingly reactionary and hateful public discourse.”

Dr. Martin Luther King, Jr. made the following observation over half a century ago, “Injustice anywhere is a threat to justice everywhere.”

“It is a disappointing reality that many of the indignities (racial and otherwise), as well as differences in perceptions regarding the history and treatment of Black Americans ominously discussed during the 1960s, still apply today,” writes Watson, a professor of history, African American studies and gender studies at East Tennessee State University.

“While some segments of the Black population are faring relatively well, far too many other factions are living in a state of crisis that is just as unsettling as the state that their parents and grandparents lived in under the oppressive era of segregation,” he adds.

Indeed, the vision Dr. King enunciated in his famous “I have a dream” speech in August 1963 at the Lincoln Memorial in Washington has still not been fully realized. Rather, racial harmony in the 21st century has been elusive at best and invisible at worst.

“The gullible assumption that America had become a post-racial society upon the election of President Obama was a radically misguided illusion,” asserts Watson, who is a widely recognized thought leader, prolific scholar and writer on issues of race.

“My motivation for writing this book is to revitalize the public conversation around issues of race, despite the pessimism and staunch cynicism of a large segment of the American public,” Watson writes, who is also a prolific writer for American Diversity Report, and also a key member of both ADR’s Advisory Board and Peer Review Team.

Watson deftly chronicles racial issues in contemporary society with a no-holds-barred approach which provides much needed transparency in today’s overly saturated high-tech Information Age. His blunt and bodacious discourse might be the only way to engage in a meaningful national conversation on race that ultimately yields concrete results.

Watson cuts through modern-day conventional wisdom on race by going beyond superficial conjecture. His viewpoints should be weighed within the full context of an increasingly diverse and multicultural population that is fast becoming a microcosm of society.

“In a nation where all the demographic data indicates that non-Whites will be the majority by the mid-2040s, it is imperative that we begin to have frank, candid, uncensored conversations about one of America’s most provocative issues—race,” writes Watson.

Consider what Watson writes in his powerful essay, Black History Month: Beyond One Month:

“Black history is not some entity that should be confined to one specific month of the year. Such an attitude is disrespectful and patronizing. Rather, the history of Black people (as is the case with the history of other ethnic groups) is one which deserves our full and undivided attention.”

“Black History Month explores and exposes the ample diversity and plethora of talent that has always existed in the Black community. This diverse exposure dispels the largely held myth by many (particularly White America) that Black America is a one-note monolith.”

“The truth is that Black people have a distinct, complex, and vibrant history. This can be said of all ethnic and religious groups.”

“However, the history of Black Americans in this nation is vastly distinct from other ethnic groups due to religious, economic, social, psychological, and educational experiences that have been visited and inflicted on us.”

“Black History Month provides a crucial and vital forum for facts, statistics, distinguished accomplishments, and triumphs that are far too often obscured and dismissed from the public discussion.”

“The history of Blacks in America has always been one-step forward, two-steps backward. Whatever gains that were secured by law were often overshadowed or mitigated by larger oppressive forces bent on curtailing such progress.”

Again, to quote the great civil rights icon Martin Luther King: “We must learn to live together as brothers or perish together as fools.”

CLICK to hear the ADR podcast interview of Dr. Elwood Watson with Deborah Levine.
Note: A longer version of this article is featured on Medium at https://democracyguardian.com/keepin-it-real-for-black-history-month-a3683bf7d148