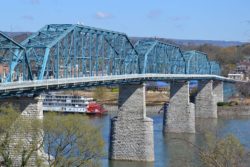 We are still dealing with the Atlanta area shooting of African American jogger, and now the death of George Floyd by law enforcement. In the midst of this violence, Chattanooga announced progress in creating a physical space to remember the lynching of an African American more than a century ago. The memorial will be a contemplative space near the Walnut Street Bridge and despite the pandemic, the expectation is that people will come to learn, reflect, mourn and learn from history. And hopefully, to apply those lessons going forward

The Bridge memorial recognizes the historic efforts of Noah Pardon and Styles Hutchins, lawyers who convinced the U.S. Supreme Court in 1906 to get involved in a state criminal case regarding Ed Johnson and halt his execution. Parden was a local Chattanooga attorney and one of the first African American lawyers to appear before the U.S. Supreme Court.  Despite the Supreme Court’s decision, local activists lynched Ed Johnson on the Walnut Street Bridge in downtown Chattanooga. Paten had to leave town to escape death threats and stay alive.

It’s time to give the history of violence against the African American community more attention than it’s gotten. Ed Johnson wasn’t the only African American lynched on the Walnut Street Bridge. About a dozen years before his lynching, another African American, Alfred Blount, was hung from the same bridge. There were an estimated 4,000 lynchings from the Reconstruction period to the civil rights era in the 1960s and probably many more incidents unreported.

It’s not hard to see remnants of this history in the recent shooting of an African American jogger by two white males, one being a former police officer. It took place in a small town with no consequences from law enforcement for 74 days when the story went public with a video. Going viral, the video changed the outcome and the two men were arrested. It makes you wonder what life would have been like at the turn of the century if cell phone technology had existed then.

Technology makes a major difference, but the culture that allowed this murder continues to be self-righteous in its actions. What is needed goes beyond videos to a shift in how we think, what we tolerate, and what government at all levels is willing and able to do. A Supreme Court stay of execution was historic, but it did not prevent a lynching. Hate crime laws are well-entrenched today, but did not prevent this murder, and others like it.

We need memorials and videos, but we also need recognition of how history resulted in ongoing risks for people of color. Today, they are more at risk of contracting the virus and dying than the general population. Science magazine reported in April that African Americans comprise 32% of Louisiana’s population, but are 70% of COVID 19 deaths. New York City reported that Hispanics and African Americans died at double the rate of Whites. Native Americans have died at three times that rate to the point where Doctors Without Borders, usually reserved for third-world countries, are now deployed on U.S. soil.

These statistics aren’t random or by chance. Systemic, long-term intolerance has resulted in poverty, crowding, and inadequate healthcare for people of color. Even as we celebrate the jobs that many people of color are doing, structural inequities are hard to erase. Workers of color are likely to serve in jobs that pay less, have more health problems, and have less insurance. Biases run deep and stronger under pandemic stress. It’s no wonder that African Americans hesitate to wear masks in public. Those masks might deter COVID 19, but they’d also ramp up suspicion to a level that could endanger life and limb. See Terry Howard’s article, Masking or Unmasking America.

As recently as 2016, the 1,000 largest U. S. Foundations provided only 10% of their domestic funding to people of color. The pandemic is expanding the awareness that the Ed Johnson memorial seeks and priorities are changing. I hope that positive reinforcement of new efforts will generate more of the same. So kudos to the New York City area churches serving as temporary coronavirus testing centers boosting outreach to Black and Latinx neighborhoods. Bravo to the Brooklyn Community Foundation’s COVID-19 Response Fund for increasing support for nonprofits focused on racial equity. Further, these nonprofits are led by community members, giving decision-making roles directly to those affected by structural racism.

As for Chattanooga, awareness and action has been nurtured for several years with the mayor’s Council Against Hate. The Ed Johnson memorial will no doubt energize the city’s social activists involved in the Council. With teams focused on education, business, media, faith & culture, and policy making, we’ll be inspired by the memorial plans and make our own plans not only for Chattanooga, but well beyond. I know I have. Take a look at the Manual for Councils Against Hate  and create a council in your city, state, or region. It’s time for all of us to re-think and re-envision what this country can achieve. If not now, then when? If not us, then who?

3 thoughts on “Bridge Memorial in the Pandemic – by Deborah Levine”