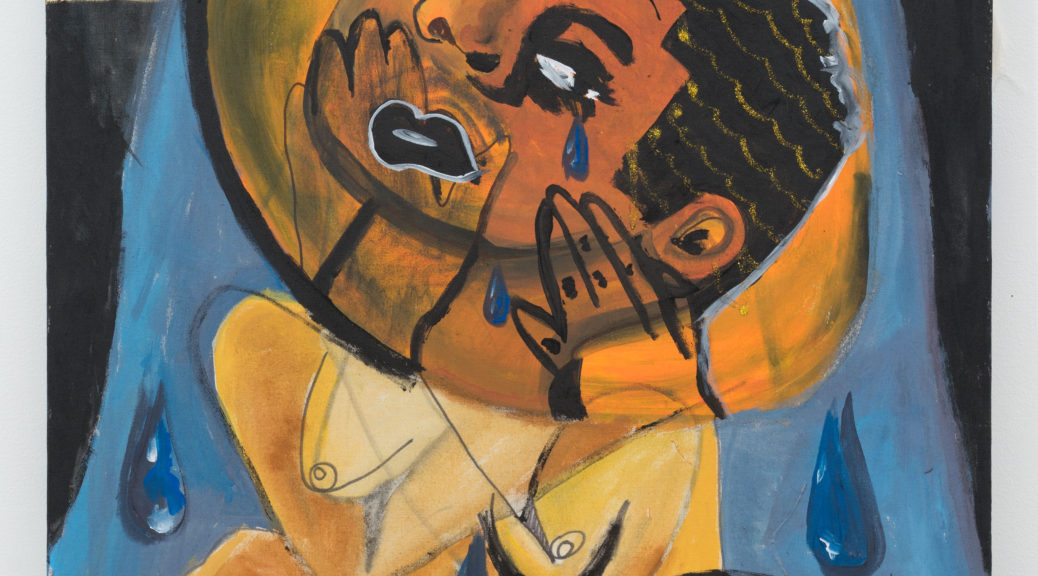 Through painting, a medium that has traditionally embraced this binary, these artists are pushing the genre in new, unprecedented directions, challenging the ways in which paintings can be used to deconstruct and rewrite conventional notions of personal identity. The exhibition highlights the inter-blending of traditional and figurative abstraction as the foundation for more fluid and inclusive expressions of identity, engendering a new visual pronoun. Engender is beyond the binary.

“If the show can expose people to questions about gender, questions that they may have never known to ask, that would be a success in my book.  I want people to be exposed to this topic first and foremost.  I think awareness is what will lead to further conversation.  When you have something so tethered to a long history of cultural categorizations such as gender, assumptions occurs.  Assumptions that negate proper exposure, discussion, and education on a very complex and multilayered component of all our lives.  The artists in the exhibition are reclaiming that narrative, visually crafting languages that speak to their own unique experience, and yet can very much be understood by all.”
~ Joshua Friedman, Curator and Associate Director of Kohn Gallery

The title, Engender, considers the various meanings of the word including “generate” and “gender anew” to demonstrate how the artists in this exhibition look to the past as a valuable reference tool that can be reworked to reflect contemporary interpretations. Treating history as an artifact of experience, their work considers the complex construction of identity, inevitably influenced by past memories and present experiences, but executed in the moment. Rooted in the word gender, Engender brings together a wide range of practitioners who portray a form of self- expression that does not revolve around the traditional masculine or feminine, and questions the constructed foundations of individuality.

From a variety of different cultures, ethnicities, and backgrounds, the presented artists internalize a number of societal projections, while asserting their individual presence and significance. The artists in Engender tread the line between traditional and figurative abstraction, pioneering an entirely new and innovative style that blurs classification in both frame of thought and frame of sight.

ABOUT THE ENGENDER ARTISTS

Mequitta Ahuja materially synthesizes her multicultural heritage into collaged works that evoke the process of identity formation. The artist draws on her Asian and African American background in her art, taking inspiration from Mughal manuscripts, Buddhist wall drawings, and Western art techniques to reveal the instabilities in social constructions such as race and gender.

Firelei Báez investigates issues of identity construction in her paintings. Whether geographical or cultural, selfhood for Báez is malleable, and she uses art to articulate a complex formulation of her Caribbean background, employing humor and imagination to create alternate environments in which cultures can commune.

Hernan Bas paints boys on the threshold of sexual self-discovery in lush, gothic landscapes. These delicate, androgynous subjects are painted with abundant brushstrokes of synthetic colors. The pieces needed to construct a narrative are often missing allowing the viewer to reimagine the present.

ZoëCharlton’s interests in gender and class fuel her drawings which work to explore social and racial interactions and evaluate historical and contemporary visual prejudices. As a black woman, she explores identity,  erasing distinctions between classes, genders, and races.

Jonathan Lyndon Chase creates figurative paintings that highlight  the difficulties  of self-identity today. Through fractured compositions that segue seamlessly between historical and contemporary styles and references, Chase portrays a form of self-expression that does not revolve around the distinctly masculine or feminine constructs of contemporary foundations of identity.

Nicole Eisenman populates her works with emotionally resonant, cartoonish figures. Full of pathos and dark humor, they are expressionistic portraits of herself and her friends or imagined characters based on her critical observations of contemporary life and culture—products of our time, reflections of ourselves.

Natalie Frank’s oil-on-canvas and mixed-media paintings plumb human nature, conveying the complexity and mutability of identity. Her work centers on the human figure, rendered semi-abstract and in heightened physical and emotional states. Through her bold, dramatic handling of paint, she reveals the struggle of being human.

Heidi Hahn creates perspectival paintings, often engaging with the female body. Her application of paint and layered surfaces, in conversation with aesthetic traditions, draw the viewer into an intense narrative which evokes our attachment to the female body and how that’s processed through both a traditional and a contemporary reading, as the many reclining female figures relate distantly female portraits painted throughout history.

Loie Hollowell’s work is representational‚ centering on the figure‚ still life‚ and landscape‚ as seen through a reductionist lens. Hollowell uses a variety of formal techniques to create subjects that manifest in tightly rendered sculptural paintings. Conveyed through bold colors, sacred geometry, and symmetry, her pulsating, sensual figures illuminate an implicit optimism in the transcendence of physical form.

Sadie Laska’s paintings are meditations on the fog of contemporary communication and the pleasurable agonies of trial and error painterly expression. Her figurative works, which she refers to as “humanoids,” blur the line between painting and sculpture. Meant to depict humanity in the most general sense, they are genderless shapes that signify avatars and icons emerging from the basic problems surrounding identity in the digital age.

Jesse Mockrin’s oil paintings marry the effete, romantic aesthetics of 18th-century Rococo portraiture with contemporary imagery to question how gender codes are prescribed, performed, and disrupted in popular culture. Drawing inspiration from current men’s fashion pictorials and classical European painting, her work depicts androgynous figures and unisexual marks of gender identity to give viewers a new lens to view painting. Mockrin’s subversion of the classics captures the way gender shifts through history, illustrating how those norms, when faded, can encapsulate a moment.

Jennifer Packer creates expressionist portraits that suggest a casual intimacy. The models for her portraits – commonly friends or family members – are relaxed and seemingly unaware of the artist’s or viewer’s gaze. Packer’s paintings are rendered in loose line and brush stroke using a limited color palette, often to the extent that her subject merges with or retreats into the background. Suggesting an emotional and psychological depth, her work is enigmatic, avoiding a straightforward reading.

Christina Quarles destabilizes the notion of a fixed subjectivity by challenging the viewer to contend with an excess of representation. It is through this excess of boundary, of surface, of identity, of gender, of relationship—that legibility breaks down and is transformed into ambiguity. It is therefore from the limits of representation that ambiguity can emerge and where the potentiality lies to make porous and mutable that which has heretofore appeared absolute, resolute, and neutral.

Nathaniel Mary Quinn makes mixed-media drawings and paintings of collaged and fragmented figures; through which he demonstrates that we are all the sum of our experiences. Formed from an amalgam of family photographs, images from articles and advertisements, and his own furious brushstrokes and charcoal marks, the men and women who populate his compositions appear as hybrids, at once monstrous and delicate. For Quinn, they are portraits of his fractured family, and images of our multi-faceted selves.

Tschabalala Self builds a singular style from the syncretic use of both painting and printmaking to explore ideas about the black female body. The artist constructs abstracted depictions of what is ostensibly the female form using a combination of sewn, printed, and painted materials, traversing different artistic and craft traditions. The obscured biological characteristics of her figures reflect Self’s own experiences and cultural attitudes toward race and gender.

Emily Mae Smith’s Pop-style paintings comment on sex and gender with satirical ingenuity, encompassing references to Art Nouveau, Disney and the Chicago Imagists in poster-format, singular narrative oil paintings. Myth-fueled and driven by characters including a recurring sunglasses-toting broom, extended tongues and butts – often framed by a mustache, and a straight and squared-off set of teeth – each character or component is a signifier for issues with sexual politics in general and serve as androgynous female avatars whose interiority, subjectivity, and psychology are completely absent as a visual language in western culture.

Jansson Stegner is known for his highly stylized figurative paintings that present subversions of gender and power. Peppering his canvases with hidden references, ranging from Old Master painting to Pop Culture, Stegner takes great expressive liberties with the human form by combining opposite signifiers of gender and strength. These ambivalent reversals of power harness a new potential and that creates new ways of looking at masculine and feminine roles.