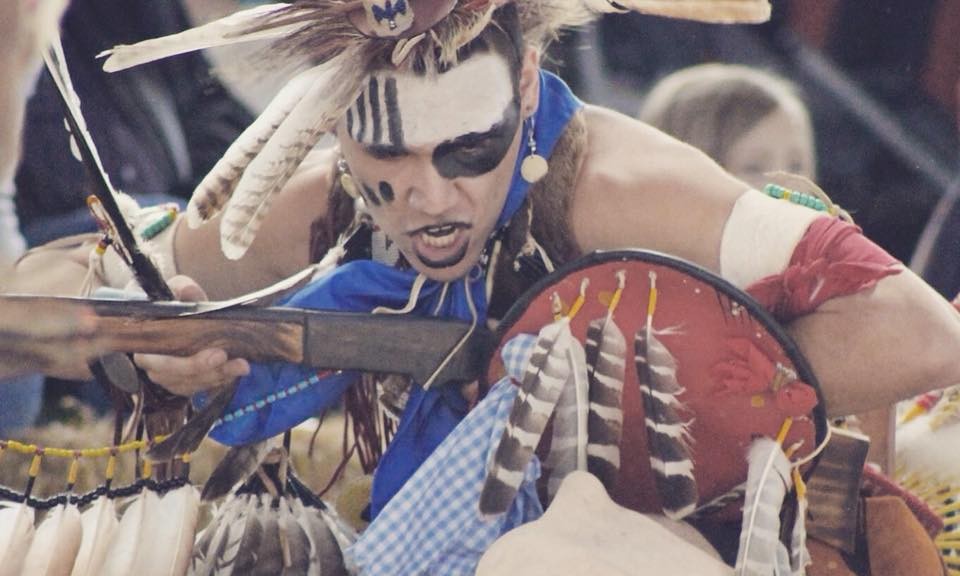 When regional Native American pow wows convene in Chattanooga’s First Tennessee Pavilion, you’ll find me there, too. This year, the gathering seemed larger and more energetic than ever. I come to admire the colorful dress, hear the drum circle, and watch the dancing. The booths full of Native American arts and crafts are irresistible and my drawers are full of jewelry purchased there. I also come for the honor guard, a promenade of Native American veterans, police, firemen, and war mothers.

This year, my curiosity took hold and I felt compelled to take up my reporter’s role. I approached two brothers from Columbia, North Carolina in full, colorful dress. As I scribbled notes on the back of my program, the extrovert of the two, David Smith, shared how he attended pow wows across the Southeast and beyond. When asked why, he said that the pow wow was a way to connect and interact with other Native Americans in a way that brought old friends together, in a way that has not always been allowed. He was determined to continue the tradition, support it, and enjoy it.

Many of the attendees had an air of leadership about them, and that was certainly true of David who was from the Lumbee tribe, or what Native Americans call a nation. He served in both the Marine Corp and the Army during the first Gulf War and in the war in Iraq. His brother, James Smith, kept the home fires burning, supporting the family as a diesel technician. Their kind, open faces led me to shared that my father was a WW II veteran and I often write about him in my books. David smiled and said that he and I had the same ingrained impulse to preserve our legacy for future generations.

My next conversation was with Navy veteran, Jackie Ross. Jackie is a member of the Cherokee and Creek nations. Currently a defense contractor, Jackie is also a head man dancer. When asked how he got that title, he replied that he was born into a performance of ritual dance and is now recognized for his talent and skill by the community. However, Cherokee dances would not be performed today because they are private.

Jackie would be performing in the style of the Lakota nation which is located in the region of the Dakotas. Jackie’s explanation of the migration of Native Americans community was enlightening. There was substantial job-related movement from the West to the Southeast in the 1970s and 80s. It brought Western traditions to Chattanooga, where Native Americans who were forced to march West began their Trail of Tears. Most dances performed at this pow wow are in Western styles.

The determination to uphold traditions through generations Native American traditions was highly visible. The elders organized the Grand Entry promenade. They also coordinated the Honor Guard with veterans of all ages. They were primarily men, but also women, especially war mothers whose sacrifices are also honored. It was common to see a veteran hold a toddler, or a baby, to his breast as he moved rhythmically around the circle to the beat of the drums. Children of all sizes were dressed in their Native American best crowded the standing audience, waiting their turn.

Colorful face paint drew me to my next interview. Michael SpiritBear, along with his cousin, Preston ManyHawks, were patiently waiting for the dance contest to get underway. The two young men introduced themselves as army brats who were in the process of enlisting in the military. Michael shared how his face paint told the story of his miraculous recovery from blindness in one eye. The round markings represented lost loved ones in war. Contemplating his own military experience with enthusiasm, he was hopeful that he’d be deployed to Afghanistan. “I’m a warrior,” he said. “If I’m going to do this, I’m going to do it right.”

When asked what he’d like the world to know about his culture, Michael responded, “As I am from Apache and Crow descent, it’s a real honor to be able to go out there and show my pride. It’s a real honor to be able to demonstrate what my people have been doing for many many years, and it makes me feel amazing to show people, how OUR people might not all be here, but we will NEVER die. I am a firm believer that our people will be here forever. Like the birds in the sky we just keep on flying. Aho! I will show my pride of being mixed blood Apache till the day I die! I will hold the name proud.”

How could I not be inspired? I approached the elder organizing the Honor Guard and asked if a daughter of a veteran might be included. He stared expressionless into my face as I stood quietly waiting for permission. Suddenly, he smiled at me and ushered me into place. There was little time to wonder what he’d seen in my face before the drums began and we all moved together around the circle. Maybe it’s a bit of fantasy on my part, but I could swear my father was there with me. Smiling.