Anyone listening can hear the loud, raucous controversies surrounding religion and our religious differences. The conversation is rife with words such as terrorism, hate, threatening, ungodly, illegal, and inhumane. The effect of this volcanic environment is to make our adrenalin run so high and long that we are virtually unable to hear the human beings involved. As hyperbole and exaggeration are added, we are witnessing a vicious cycle of protests and counter-protests, threats and counter-threats. Can this cycle be broken, or at least interrupted long enough for us to stop yelling, listen effectively, and initiate some major problem solving?

Our basic human reaction is to hit out harder than the next person, double down in the game of one-upmanship. This can mean a flurry of social media that engages and inflames with no end in sight. Or conversely, some will prefer the silent treatment. The problem with silence is that it generates cultural ignorance which leads to cultural insensitivity. Even if an awkward moment was not intended to offend, the ignorance demonstrated generates ill will and mistrust. Religious insensitivity is particularly painful as belief is held deep within us.

When exhaustion sets in, many will look for a safe place, somewhere or someone who can nurture them and offer them comfort. Increasingly, the concept of a safe zone, particularly on campuses, has become popular. However, not all of us have that luxury, so what is a viable alternative for getting space to breathe and listen?

Ideally, we should be able to find that safe place within ourselves, meditate and breathe so that we can lower our adrenalin level and turn off the fight-flight response. Those who have the ability to consciously create a breathing space in and around themselves are at an advantage. They can be a voice of reason in a tumultuous environment. Yet, most of us do not have that ability. Leaders with this ability can assist others to transform their highly emotional discussion to one in which they can listen rather than insult and be insulted.

What would that discussion look like? Dealing with religious differences in the workplace has been a rare occurrence in the past, often relegated to the management of harassment accusations. As a result, the emotional involvement regarding religion can all easily rise the level of hostility. Yet, given today’s political and social environment, ignoring religious diversity issues may lead to more clashes and mistrust. By acknowledging the challenge of religious diversity, affirmation is given to explore strategies for managing that diversity using the “Harmonize NOT Homogenize” 8 Step Plan.

Step #1: Consider creating a listening model that can be replicated throughout the company. Understand that there may be reluctance to participate given the sacred nature of religion. Keep in mind this definition of religion adapted from cultural anthropologist, Emile Durkheim, “A religion is a unified system of beliefs and practices relative to sacred things – things set apart – beliefs and practices which unite into one single moral community all those who adhere to them.” Respect and anticipate the tremendous depth of emotion involved in religious diversity work.

Step #2: Offer an incentive to participate in this pilot interreligious project. Whether it’s a bonus or time off, make the incentive available on a first come, first served basis to increase its value. Also, consider the venue. Find a space that is designed to be neutral, possibly off-site: a quiet room with mellow lighting, an uncluttered but friendly decor, and acoustics that allow soft voices to be heard.

Step #3: Having set the scene, now set the tone of the dialogue. It’s not enough to provide motivational instruction to the participants by asking them to be objective, fair, and impartial. Psychology research at Princeton University shows that such instructions do not over ride our natural tendencies to believe what we want to believe. We use the information and evidence presented to us as confirmation of our beliefs and biases. There is nothing wrong with providing details about diverse religious holidays and cultural traditions. The resulting cultural competency can create an awareness that’s useful in planning and scheduling.

Step #4: Go beyond cultural and religious information to broaden decision-making capabilities. Complex problem-solving requires enhanced thought patterns, which, in turn, require increased listening skills. Psychology studies have determined that the best strategy for effective listening is the “consider the opposite” strategy. Ideally, leadership should apply this strategy, along with cultural competency, to the interreligious discussion group. The process begins with a brainstorming exercise best called, “Where we Differ – Where we Agree.” Divide the room into small sub-groups, each generating a list of “Where we Differ.” As each group shares the results out loud, a visible list is compiled that includes all items reported, with an asterisk next to those that are mentioned more than once. The process is then repeated for “Where we Agree.” This exercise creates a common vocabulary for the participants, a cultural map with pitfalls, roadblocks, and oases.

Step #5: The group is then ready to move into a storytelling mode. Using the items that were mentioned more than once, ask the participants to share a personal story related to that issue. For example, if differences in the terminology for the Divine came up several times, ask for stories reflecting personal relationships to the divine name of choice. If the issue of charity came up several times as a common theme, ask for personal stories about the meaning of kindness or good works.

Step #6: Create role-playing scenarios involving “Where we Differ” that illustrates a challenging situation. Ask for participants to provide a solution from their own point of view, and then give a solution from an alternate perspective. Ask that both solutions be written down and then request that volunteers share the dual responses with the group. Direct the group to brainstorm additional solutions. The creativity involved in this exercise will carry over beyond the dialogue session. If the dialogue is repeated periodically, the creative thinking, enhanced listening skills, and problem-solving capabilities will be enhanced and more deeply embedded in the individuals and the group.

Step #7: Groups repeating the dialogue process many wish to add a section that looks at the “Where we Agree” scenario more closely. Role playing that focuses on areas of agreement may well evolve into actionable projects that make a difference in the workplace and in the community. These projects demonstrate the benefits of working together. The dialogue group will be a visible model for the listening skills and problem solving capabilities that lead to strong, vibrant teams. 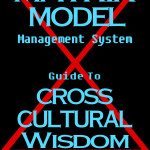 Step #8: Learn more about how to “Harmonize NOT Homogenize.” See the Matrix Model Management System: Guide to Cross-Cultural Wisdom.