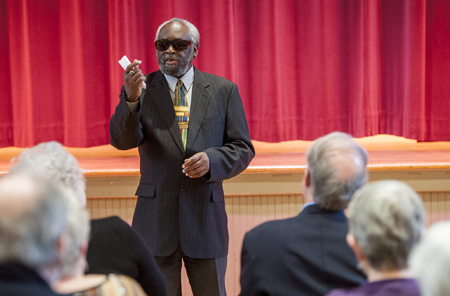 His name is Stan Maclin. He lives in Harrisonburg, Virginia, having moved there 20 years ago. He is the founder and curator of the Harriet Tubman Cultural Center in that city.

It should come as no surprise then that Maclin’s Center has garnered national attention and many phone calls ignited by the recently released movie “Harriett,” the story of Harriett Tubman who single handedly made many forays deep into the south to free slaves.

When asked why he started the Center, in words that undoubtedly flowed from his mouth hundreds of times over the years, Maclin said that he wanted to open a place where African Americans can learn about their history, identity, and culture. He wanted to be able the educate future generations so that history does not repeat itself.

When I asked him about his impressions of the Tubman movie and the reviews – the negative ones in particular – Stan was quick to respond.

“Look, I have no time for the naysayers. There’s no such thing as a perfect movie that everyone agrees with. However, the depictions in the movie aside, Tubman was one powerful, influential leader who had relationships with the likes of Frederick Douglass and Susan D. Anthony.”

Next question: Can you tell me something about Harriett that the average person probably doesn’t know about?

“Her grandparents were from Ghana. Also, she was an environmentalist and entrepreneur. She knew the outdoors like the back of her hand. She could read mulch on trees and stars in the sky and had an incredible ability to listen to the sounds of nature. She was also a great cook and loved to bake pies and make root beer. As an entrepreneur, Harriett employed women to wash men’s clothes.

Next question: If you could somehow talk to her today, what questions would you ask her?

“My first question would be why she kept her ex-husband’s last name after he married someone else. I’d also want to know what thoughts raced through her mind when she crossed the Mason Dixon line and realized that she was finally free. And last, I would want to know what God said to her when she elapsed into the epileptic trance as a result of the head injury inflicted on her.

Towards the end of the interview we talked about the movie and its impact on white people who were in the audience.

“Well the interesting thing is Terry that the theater was jam-packed and from what I could see there were only four African-Americans present, including me. The rest were white people.

This led to my next question: Did you speak to any of the white attendees about their impressions of the movie?

“First, at the end of the movie they all stood up and gave it a standing ovation. And the ones I talked to said they really liked the movie’s depiction of Tubman as a strong black woman. One person said that she was moved by seeing the devastating impact of the separation of the family and the implications of that today. And another said she was moved by the act of forgiveness when Tubman spared the life of her former slaveholder and tormentor when she could have easily killed him. To me forgiveness was a fitting end to the movie.

My next question: If Tubman were alive today, what do you believe she would be doing?

He paused before answering: “Wow, great question Terry. She would definitely be empowering people to do what they were born to do if life. That’s for sure. And since the family system is constantly under attack these days, I believe that she would be strongly advocating family values and the importance of being our brother’s keeper. She would probably be working to change our penal system that disproportionally incarcerates people of color.”

Okay Mr. Maclin, you get the last word here.

“I’m concerned, greatly concerned, by our total loss of community. Self- preservation is clearly the order of the day. It seems that once many of us have reached the top we don’t always reach back to help those less fortunate. Hey, if Harriette Tubman could reach back to those in slavery once she became free, why can’t we?