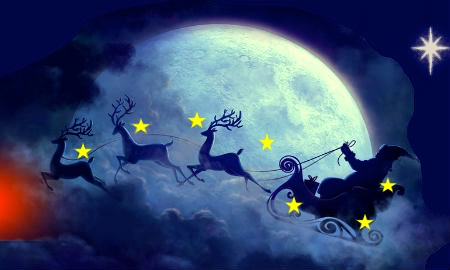 The Big Dipper is really Santa’s sled
freewheeling around the North Pole
through frosty stars and a red nosed
bear taking pointers from Rudolf as
his reins arc to a super giant red-eye
star, coursing through the circumpolar
tinsel of stars, a garland of firelights,
but avoiding the unwinding glittering
coil of that dragon, Draco, whose cold
aspic heart, Thuban, thumps the night,

but it’s a certain Santa & his Bears
who bring all those stardust wishes
full of hope sifted from a special star
that’s twinkling in the silent night.

Author’s Commentary: For this American sonnet, it occurred to me that Santa’s sled and reindeer could fit the outline of the Big Dipper. To the best of my knowledge, this is an original concept.

The Big Dipper is known as the constellation Ursa majoris, the Bear, but in the Nordic tradition, it is a wagon. So in that spirit, a large sled is consistent with that image. And with Santa being in the North Pole, it is fitting that the sled points to the North Star, Polaris. [The two pointer stars—Dubhe (Arabic for bear) and Merak (Arabic for loins of the bear)—are aligned with the back of the sled.] Polaris is actually a variable star, so I imaginatively speculate that this pulsating variable could have undergone a catastrophic perturbation which caused it to suddenly shine brightly, as if the Star of Bethlehem. (I am well informed about stellar dynamics, so this conjecture is pure science fiction.) The Big Dipper is a circumpolar constellation, which means it revolves around the pole star, so it is visible throughout the night. I love the symbolism of making the pole star the Star of Bethlehem. Santa Claus, that benevolent gift-giver to children, travels all around the world while always pointing to that bright and shining star.

In star-hopping lingo, stargazers follow the stars in bend of the handle of the Big Dipper to locate a red supergiant star, Arc to Arcturus, which I find as a convenient proxy for the guiding red light (like Rudolf’s nose in the popular legend). In the image, I use poetic license with respect to scale because Arcturus would not be that close to the Big Dipper, nor would it be glowing that big and that bright!

Not shown in the image is another circumpolar constellation, Draco, whose brightest star, Thuban, is the serpentine dragon’s heart. It is in contradistinction to the goodness implied by the Star of Bethlehem. Of course, the allusion at the end of the poem to that wonderful German hymn, “Silent Night,” has special seasonal significance for some that transcends a peaceful gift-giving Santa. 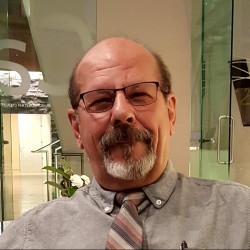