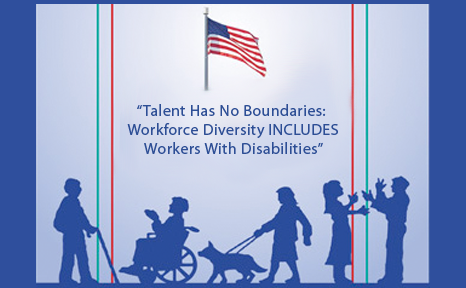 All savvy employers should know by now that providing equal opportunities to people with disabilities simply makes good business sense in the 21st century global economy. This is especially true in a competitive U.S. labor market.

Unfortunately, not every company has gotten the message.

The Americans with Disabilities Act (ADA) was signed into law by President George H.W. Bush on July 26, 1990. This sweeping statute has opened the doors of inclusion and gainful employment to millions of citizens with disabilities nationwide, which has helped to boost business productivity.

President Bush said in signing the law: “This historic act is the world’s first comprehensive declaration of equality for people with disabilities.”

However, voluntary compliance by all employers still can’t be taken for granted, even though the ADA was passed by Congress with overwhelming bipartisan approval.
The reality is that disability discrimination is still prevalent in modern society, from Wall Street to Main Street USA.

As the ADA turns 28, there is good and bad news upon which to reflect regarding people with disabilities (PWDs).

The bad news: Too many employers — from Corporate America to small and mid-sized companies — continue to miss out on hiring the best available talent by unlawfully excluding workers with disabilities for discriminatory reasons. They fail to realize that many PWDs are qualified, ready, willing and able to work. All they need is an equal opportunity to showcase their abilities.

Yet nearly 30-years after enactment of the ADA, countless qualified applicants with disabilities continue to be dismissed from consideration based on unfounded myths, fears and stereotypes, in addition to blatant bias and bigotry.

It remains paradoxical that in the USA — a country founded on the bedrock principles of freedom and equality — qualified PWDs are still being denied the basic freedom to compete and advance on a level playing field, one without discriminatory barriers and stereotypes.

Narrow-minded companies only hurt themselves by excluding PWDs from employment. PWDs represent a vast pool of untapped talent.

But there’s good news too: Many savvy and progressive employers have learned that leveraging the talents and abilities of PWDs helps maximize productivity and extend their reach to a diverse segment of consumers.

Being more inclusive should be of utmost importance to all employers in an increasingly diverse society.

Nevertheless, a continuing stigma of disability bias is evidenced by the large number of discrimination cases against intransigent employers who reject voluntary compliance with the ADA.

The U.S. Equal Employment Opportunity Commission (EEOC) — where I worked for many years as a national/global spokesman — received about 27,000 charges of disability discrimination in 2017, accounting for almost one-third of the private sector caseload.

The number of disability bias claims filed annually with the EEOC are nearly as many as those filed based on race discrimination.

This persistent problem is magnified when accounting for the countless thousands of unreported incidents of disability discrimination in the employment context and all facets of society. The number of reported cases represent the proverbial tip of the iceberg, according to labor and civil rights experts (which is true for all types of discrimination and harassment).

And while people with physical disabilities have made gains since passage of the ADA, it’s a different story for people with mental disabilities (anxiety disorder, depression, etc.). All Americans must be vigilant to end the stigma of mental illness.

ADA charges based on mental disabilities are the biggest subcategory of disability discrimination cases filed with the EEOC.

Therefore, more companies should be mindful about the real costs of disability bias for both physical and mental impairments. These costs manifest for business not only in terms of large payouts for investigations, litigation settlements and jury verdicts, but also in major PR damage to the company brand (for which one can’t place a dollar amount).

It’s hard to believe that almost three decades after the ADA’s enactment, PWDs continue to confront a plethora of unfounded myths, fears and stereotypes about their ability to do the job.

These biased attitudes preclude PWDs from reaching their full employment potential based on talent, ability and merit, which should be the only criteria for making employment decisions.

Repeat: All applicants should be assessed on their talent, ability and merit to do the job — period!

Let’s remember that disabilities affect people of every race, color, gender, religion, age and national origin, a huge portion of the U.S. population and global populace.

PWDs are our parents, spouses, children, relatives, friends, neighbors, co-workers and significant others. Did you know that according to the U.S. Census Bureau, 20% of all Americans have a temporary or permanent disability.

That equates to about 60 million citizens of all ages who represent a consumer base worth hundreds of billions of dollars. This is a colossal chunk of purchasing power in an ultra-competitive global economy.

Moreover, the percentage of Americans with disabilities has held steady over the years and will likely increase as Baby Boomers and Generation X continue to live longer thanks to cutting-edge technology and medical breakthroughs.

The disability population represents an integral segment of society which helps form the fabric of America. Further, there are a significant number of disabled veterans who bravely sacrificed their lives and limbs in military service to America.

As noted above, too many companies are obstinate in hiring and reasonably accommodating employees with disabilities. But let’s also consider the return on investment (ROI), or the business case for disability employment.

According to the esteemed Employment and Disability Institute of Cornell University’s School of Industrial and Labor Relations:

87 percent: consumers who responded to a survey who said they “agreed” or “strongly agreed” that they would prefer to give their business to companies that employ people with disabilities.

36 percent: employers who said they experienced a one-time cost in accommodating employees with disabilities.

4 percent: employers who said the accommodation resulted in an ongoing, annual cost to the company.

$500: the typical one-time expenditure by employers who provided a reasonable accommodation to an employee with a disability.

600 percent: employers who provided internships to people with disabilities were nearly six times more likely to hire those individuals.

Therefore, it’s incumbent for corporate leadership to send a clear message from the top-down that diversity and inclusion makes good business sense, including hiring qualified people with disabilities based on merit.

It’s not enough for the HR staff or mid-level managers to put the word out. That’s because when the message is forcefully communicated from the very top of the company, it has a higher likelihood of being followed down the organizational chart.

New and evolving cost-effective technologies are available to accommodate many employees with disabilities based on their specific essential job functions.

Additionally, some disability accommodations, like alternate schedules and flexible work, cost nothing at all. Telework (remote work or telecommuting) on a regular or periodic basis, for example, saves money for employers and reduces environmental degradation inherent with gas guzzling commutes.

It really shouldn’t matter where employee talent derives. Ability is what counts most. Moreover, PWDs should never be ruled out categorically by employers for unlawful and immoral reasons. Employees with disabilities tend to work smarter and harder because of the high hurdles they must overcome to secure gainful employment. PWDs highly value their jobs.

As America commemorates the ADA, let’s recall that disability discrimination has no place in the workplace or any other place. Yet 28 years after passage of the landmark law, PWDs are too often treated as second class citizens.

This must end ASAP. The fact is that qualified job applicants with disabilities can be found everywhere in every industry. Employers need to fine tune and readjust their disability recruitment strategies or risk missing out on key talent.

Closely coordinating with disability advocacy groups, like the American Association of People with Disabilities (and others listed above), is a good first step to open the clogged pipeline.

Again, disability employment is all about ability, skills, talent and merit — rather than unfounded myths, fears and stereotypes.

Lastly, the fundamental principle of equal opportunity and equal justice for all represents the very essence of the American Dream.

This principle is enshrined in the Declaration of Independence, which states that all individuals have “unalienable rights” to “Life, Liberty and the pursuit of Happiness…”

And that includes people with disabilities.