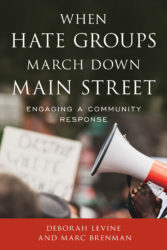 CHATTANOOGA, TN. – As the alarming number of hate groups and hate crimes continues to surge nationwide, the American Diversity Report has announced the publication of an informative and insightful new book for citizens, educators, civic leaders and civil rights advocates: When Hate Groups March Down Main Street: Engaging a Community Response.

“When Hate Groups March Down Main Street is a comprehensive, authoritative resource guide for communities, organizations, and individuals who are concerned and intimidated by the resurgence of neo-Nazi and extreme right-wing groups in the United States,” says R&L.

The publisher adds: “Communities have often been caught flat-footed when confronting neo-Nazi and far right-wing extremists. This book examines how hate groups act and what motivates them and discusses, using case studies and community resources, how to equip communities to successfully respond to these incursions.”

Among the relevant topics covered by chapter title are: The Local-Global Context; Hate and Neo-Nazis; Hate and White Supremacists; The Hate Message Online; Hate Crime Connection; Corporate and Legal Context; Community Organizing; Recruitment and Radicalization; What Is Our Moral Obligation?; Globalization and Economic Disparities; Bias, Prejudice, and Hate; The Special Responsibility of Schools; Holocaust Education; and, Interfaith Efforts.

Deborah J. Levine is the founder and Editor-in-Chief of the online media and training platform American Diversity Report, as well as an award-winning author of 14 books – including The Liberator’s Daughter (2016), a compelling memoir documenting her father’s interrogation of Nazi soldiers as a U.S. military intelligence officer in World War II. Her work spotlights thought leadership, cultural competence, diversity and inclusion, interfaith studies, creativity and spirituality. Levine is a sought-after speaker, thought leader and corporate trainer. She was recently recognized by Forbes Magazine as one of “10 Diversity and Inclusion Trailblazers.”

Marc Brenman is Managing Member of IDARE LLC, a Maryland-based consulting and training firm; Regional Advisor, School of the South; and Member, National Advisory Council, The City Project (Los Angeles). He was formerly Executive Director of the Washington State Human Rights Commission and has served at the Office of Civil Rights for the U.S. Department of Education. Additionally, Brenman worked as Senior Policy Advisor for Civil Rights at the U.S. Department of Transportation, and was part of of the Diversity Standards Task Force at the Society for Human Resource Management (SHRM).

Among the positive reviews the book has already received are the following:

For further information about the book and how to purchase it in paperback, hardcover and Kindle CLICK BELOW: