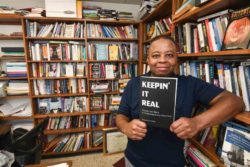 “Aunt Jemima’s pancakes, Mrs. Butterworth’s syrup, Uncle Ben’s rice, Cream of Wheat, and the last remaining Sambo’s restaurant are all brands that trafficked in images of docile Black servants all too willing to adhere to the psychologically regressive shackles of white servitude,” writes Dr. Watson in a recent article (Saying Goodbye to Aunt Jemima Is Not Enough) in Public Seminar, an independent academic journal of The New School Publishing Initiative based in New York City.

“It is way past time these brand relics and their corporate overlords conceded to common sense and decency by dropping names and mascots that originated in an era when racially bigoted portrayals were acceptable for commercial purposes,” adds Watson, who teaches African American Studies, Gender Studies, Popular Culture, and Post-World War II History at East Tennessee State University. “We need a hard and sustained look at the impact of systemic racism. We cannot get sidetracked from achieving substantive victories by easy ones over symbolic gestures.”

Watson says some of the ways in which corporate America can support the Black community in ending systemic racism are through economic initiatives, such as:

“Wall Street, law firms, the music industry, Hollywood, political organizations, and other corporations should be on the front line of devising such opportunities,” urges Professor Watson. “If not, they should be held to account.”

Dr. Watson’s most recent book is titled, Keepin’ It Real: Essays on Race In Contemporary America (University of Chicago Press). His other books include, “Outsiders Within: Black Women in the Legal Academy After Brown v Board” (Rowman & Littlefield Publishers) and “Generation X Professors Speak: Voices from Academia” (The Scarecrow Press). His forthcoming book, “Talkin’ to You Bro! Real Challenges Men Face in the 21st Century” (Lasting Impact Press) is scheduled for release in the near future.

Deborah Levine, editor-in-chief of the American Diversity Report (where Watson is an advisory board member and featured contributor), notes: “Dr. Elwood Watson is an invaluable asset to our mission, stakeholders and readers. The news media can likewise benefit from his authoritative insights and fresh perspectives on race-related issues during these tumultuous times.”

Watson is available for media interviews on a host of timely topics including (but not limited to): Black Lives Matter, African American history, race and President Trump, race and COVID-19, race and gender equity, racial politics and the 2020 election, white supremacy and white fragility, as well as the debate over Confederate statues and monuments. You can find Dr. Watson online via Twitter and LinkedIn.

NOTE TO MEDIA: To schedule an interview with Dr. Watson, please email David B. Grinberg at GrinbergGlobalPR@gmail.com

David B. Grinberg
David is a strategic communications consultant, ghostwriter, and literary PR agent on issues of workforce diversity, equal employment opportunity, race and gender equity, and other social justice causes. He is a former career spokesman for the U.S. Equal Employment Opportunity Commission (EEOC), where he managed media relations for agency headquarters and 50 field offices nationwide for over a decade. Prior to his public service at the EEOC, David was a young political appointee for President Bill Clinton in the White House: Office of Presidential Personnel, and Office of Management and Budget (OMB). A native New Yorker and University of Maryland graduate, David began his career in journalism. You can find David online via LinkedIn, Twitter, Medium, Good Men Project, Thrive Global, BIZCATALYST 360°, and American Diversity Report.